Leo Frigo was born into a large Italian-American family who at the time were living in Pound Wisconsin. He was the thirteenth of sixteen children, nine sons and seven daughters of Pasquale and Camilla Frigo.

When he was five years old he enrolled in Guardian Angels Boarding School in Oneida. Several of his older brothers and sisters were also students there. He loved the woods in Oneida and sometimes played cowboys and Indians with the Oneida children, ending up tied to a tree when the Indians won!

His four years of high school were spent in De Pere at another boarding school, St. Norbert High School. There Leo made many life long friends and seriously considered a religious vocation.

After graduating as Salutatorian of his class, he entered the Franciscan order in New York and after a few months entered the Trappist Order in Dubuque Iowa. After less than a year he decided a meatless diet was not for him, so he returned home and worked in the family business. When Uncle Sam came calling Leo entered the U.S. Army and served in the Searchlight Division in Korea.

Using the G.I. Bill, he became a student in the Dairy Science Department at Iowa State University, Ames where he met and married fellow student Fran Chapman. After graduation from ISU it was back to Frigo Cheese where his first managerial position was as plant manager at Carney Milk Products, Carney Michigan. After six years as a “UPer” he and Fran took their growing family of four daughters to Lena WI where he became the Corporate Production Manager and Treasurer. He and his brothers expanded the business into South Dakota and he traveled to the Dakotas by car every other week for two years, many times picking up hitchhikers of dubious character. Like his father before him, he was never afraid to give a helping hand to those in need.

Leo retired as President of Frigo Cheese Corporation in 1983 at the age of 52. He wished to devote the remainder of his life to apostolic work and had been preparing for that mission before retirement by joining the St. Vincent de Paul Society. His first few months of retirement were spent assisting parolees, taking them on job interviews and assisting in their rehabilitation. The director of a local halfway house, Arlene Conant, suggested to Leo that the biggest problems ex-convicts faced was finding a job and supporting themselves. They sometimes resorted to stealing to have enough food. Arlene took Leo to St. Joseph Food Pantry in Appleton and it is here that Leo conceived the idea of beginning a food pantry in Green Bay.

Obtaining space in a corner of the former St. Vincent de Paul store on Webster Court, now renamed Leo Frigo Way, Leo organized meetings of volunteers through the churches of all denominations. He visited all the local grocery stores begging for their surplus unsaleable food, even going as far as jumping into the dumpsters to retrieve food when it was denied. Leo used to say,

“Its better that I go into the dumpster rather than making the poor go there, at the end of the day my dignity will be intact and so will theirs.”

Leo passed away on February 13, 2001 from injuries sustained in a car accident. He was delivering food to a shut in.  Even though he may be gone, his spirit and love lives on through all who enter Paul’s Pantry. 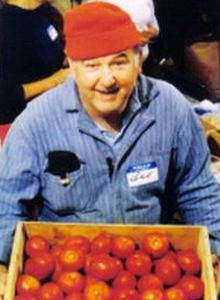